Logitech have released a new wheel, the G923. It looks almost identical to the 5 year old G29, but boasts a new trueforce force feedback feature. So is this wheel worth upgrading to or is it the same wheel we've been racing with for years? 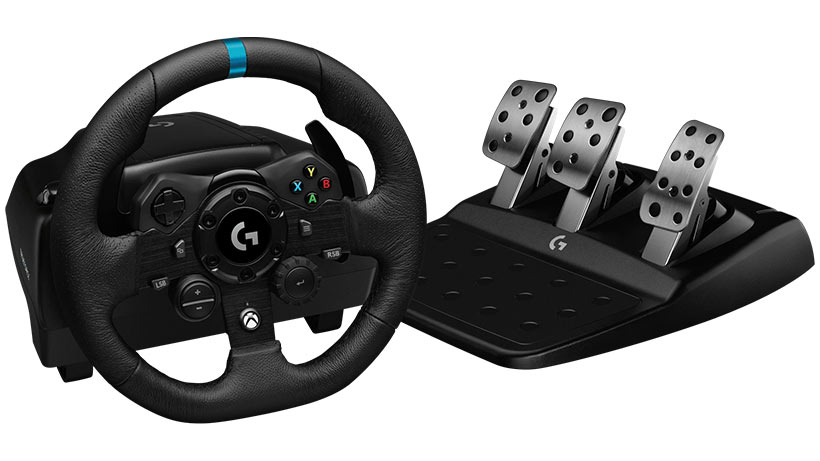 So, almost out of nowhere Logitech revealed their “brand new” racing wheel. This got many sim racers excited until… We all saw how the G923 looked. It looks identical to the G29!

Well, since we already had a Logitech G29 set up on our sim rig. We thought we would pick up the G923, and do a head to head review comparison.

How is the Logitech G923 different from the G29?

Let’s try to address the elephant in the room. The G923 looks identical to the G29 in almost every way. It features the same wheel design, the same button layout and identical-looking pedals.

There are a few very subtle changes which you’ll notice if you look hard enough. The centre logo is different, the shifters are finished in a black colour, all of the buttons are now black, and there is a rather sexy Trueforce sticker on the side of the wheelbase.

So what is different? Well, the G923 for Xbox, now includes the rotation dial and rev lights which were only present on the PC and PS4 version of the older G29. This brings a little extra functionality for Xbox racers. 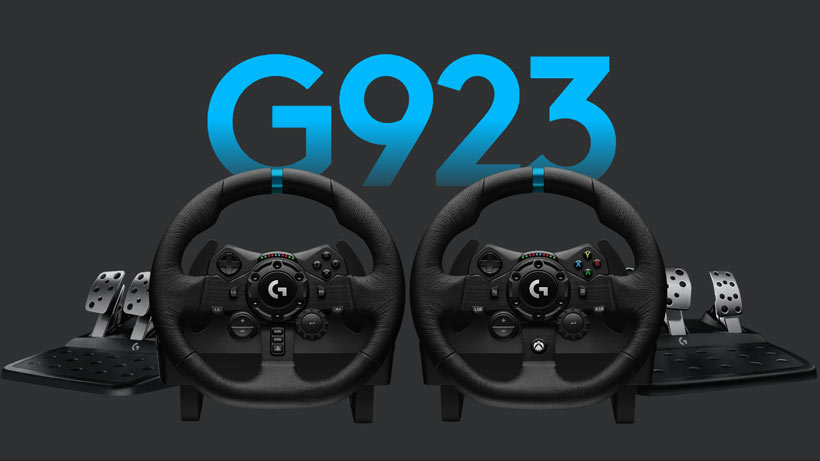 Logitech says that the force feedback technology within the G923 is entirely new. They have introduced new gear-driven motors and a new internal configuration which they now call Trueforce.

Logitech is still using the tried and tested method of gear-driven force feedback. As you may have read from our Logitech G29 review, this isn’t the best force feedback technology available. And it doesn’t produce the most accurate or immersive force feedback.

Despite Logitech updating the internals of this racing wheel, it still outputs the same force feedback strength as the old G29. Although Logitech won’t confirm the exact strength of the new wheel, it certainly doesn’t feel stronger than the G29. That will put it at around 2Nm.

The force feedback itself doesn’t feel any smoother than before, and we aren’t too surprised by this. There is a limitation to the smoothness you can achieve with gears, and Logitech seems to have reached that with this generation of racing wheels.

As you drive, you can feel the gears turning, and this is especially true when making very fine wheel angle adjustments. If you are mid-corner, and try to apply slightly more wheel input, you can actually feel the cogs in the gears.

So we’ve found out that the upgraded force feedback isn’t actually much different to that in the G29. So that begs the question, what exactly is Logitech Trueforce? 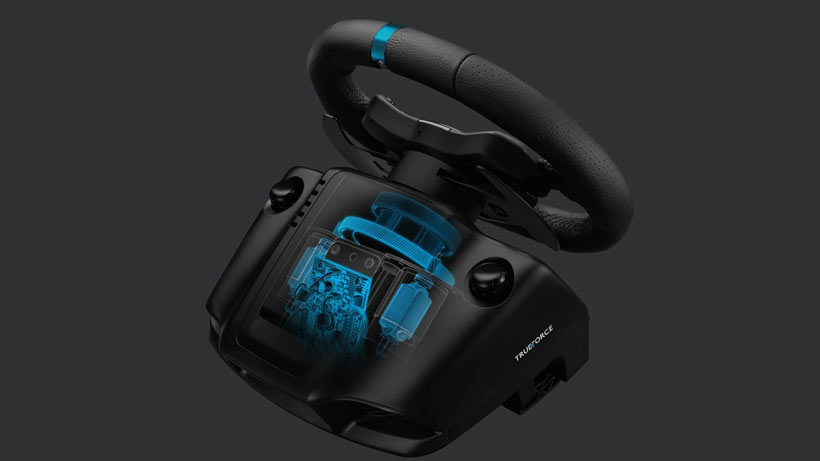 Trueforce is the name that Logitech have given their new wheel vibration technology. Trueforce is designed to replicate the vibration that you would feel in the chassis of a car if you were driving it in real life.

The goal is to add extra immersion to your sim racing experience and allow you to feel a stronger connection to the car you are driving. Does it work? Well, yes and no.

Now, with the Logitech G923, you still get this same force feedback, but you will also notice a vibration through the wheel rim. Logitech has designed the G923 to utilise the in-game physics and audio to add extra vibration to the wheel.

It will convert the physics and engine audio into vibrations that vary in strength. The louder your engine and stronger the car physics, the stronger the vibration in your wheel will be.

This is immediately noticeable when racing, but it doesn’t always feel natural. In fact, in some instances, it can take away from the actual force feedback. The vibration can sometimes numb your palms, or feel a little overdone.

However, in limited cases, it can feel a little more immersive. You can dial this feature down in games such as Assetto Corsa Competizione, and I think the more subtle this new force feedback is, the better it is.

Unfortunately, at launch, this feature isn’t even supported in the majority of racing sim games. The only games that currently support this feature are Assetto Corsa Competizione and GT Sport.

I’m almost certain every sim racer will support this over time, but that support network isn’t there just yet.

Is the Logitech G923 a direct drive wheel?

As mentioned above, the new Logitech G923 uses gear-driven force feedback. This is a shame, as many sim racers, including ourselves, were hoping for a direct drive wheel from Logitech.

In fact, when Logitech announced that they were releasing a new racing wheel. I actually got very excited that another manufacturer was entering the direct-drive space. Oh, how disappointed I was.

We shouldn’t have been too surprised though, as Logitech has never released a direct drive wheel in the past. And they are a company that like to stick to mainstream gaming peripherals. They tend to leave the hardcore niche peripherals to other manufacturers.

Are the pedals upgraded?

At first glance, the pedals that are included with the Logitech G923 look absolutely identical to the old pedal set. That is other than the slightly changed Logitech logo that sits just under the pedals.

The pedal design, construction and positioning are identical to the old kit. This is good news for those racers who have nailed their heel and toe technique. As you won’t need to adjust to new pedal positions.

Despite the same appearance, Logitech says they have upgraded the pedal technology to make the potentiometer pedals a little smoother. Each pedal uses the same technology as before, however, Logitech has spent some time making the two-step brake pedal a little more fluid.

This is noticeable when you compare the two-pedal kits side by side, with the new brake feeling ever so slightly softer and smoother across its movement range.

Although, all in all, this isn’t a huge upgrade in terms of performance or quality. And most racers wouldn’t notice a difference between the two pedals.

How compatible is the Logitech G923?

This may add a little confusion for those who are buying the new G923. Meaning you have to be extra careful you are purchasing the right console version.

Other than the two versions of the G923, the compatibility remains the same as the G29. This wheel will work across every racing sim available, although as mentioned, the Trueforce technology isn’t fully supported yet.

The G923 will also work with the new generation of Xbox, the Xbox Series X. We haven’t had confirmation that the PS5 will support this racing wheel yet, but we would be amazed if it doesn’t.

If you already own the Logitech shifter, this new racing wheel is fully compatible. You can connect your shifter in exactly the same way you did with the old G29, and it will work out of the box. 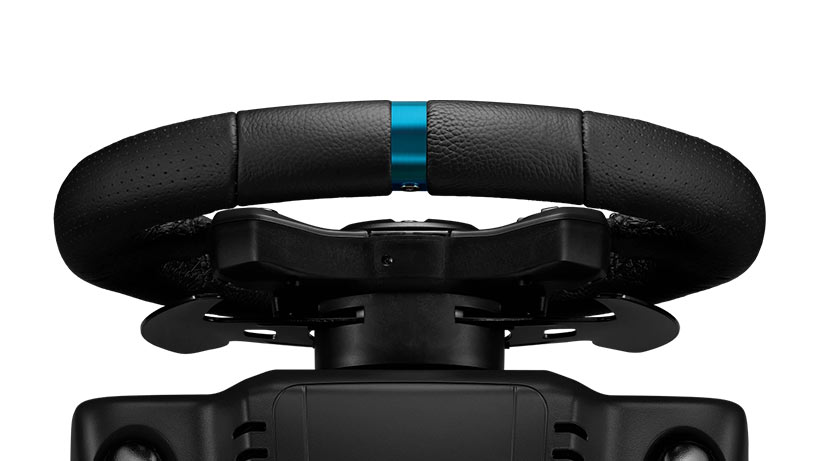 The Logitech G923 is a strange proposition. It’s almost identical to the older G29 and doesn’t change the tried and tested formula.

It is a racing wheel that is completely aimed at the entry-level racing wheel market. Those who don’t currently own any form of racing wheel, but really want to get into sim racing.

And for that segment of the sim racing community, this wheel is still very well suited. It is one of the better budget racing wheels available to buy, offering a complete plug and play package.

This does put it almost out of contention when it comes to a budget racing wheel. Brands such as Thrustmaster offer racing wheels for around $100 less.

Despite this, unlike some Thrustmaster wheels, this racing wheel oozes extra quality in both design and build. This added quality, combined with the superb game and console support, does lead us to recommend this racing wheel for new sim racers.

Should I upgrade to the Logitech G923?

What if you currently own a G29 or G920. Should you upgrade to the new Logitech G923? In a nutshell, we wouldn’t recommend it. The upgraded G923 doesn’t offer much of a different experience when compared to the G29.

And the new Trueforce force feedback certainly doesn’t revolutionize Logitech’s racing wheel proposition. If you currently have a G29 in fully working order, forget about upgrading to the G923.

If you are looking at upgrading your sim rig, we would recommend you start looking at the much better Fanatec CSL DD racing wheel. 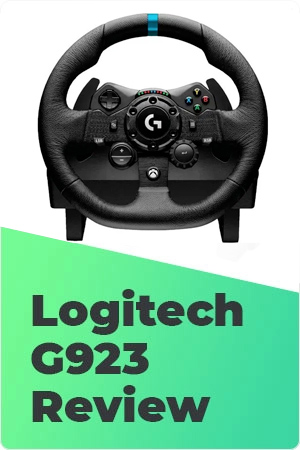 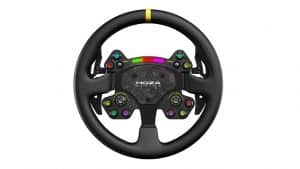 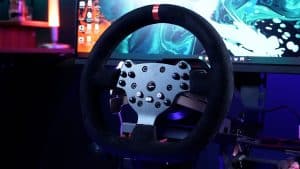 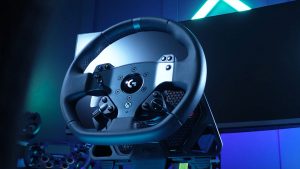 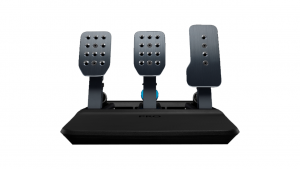