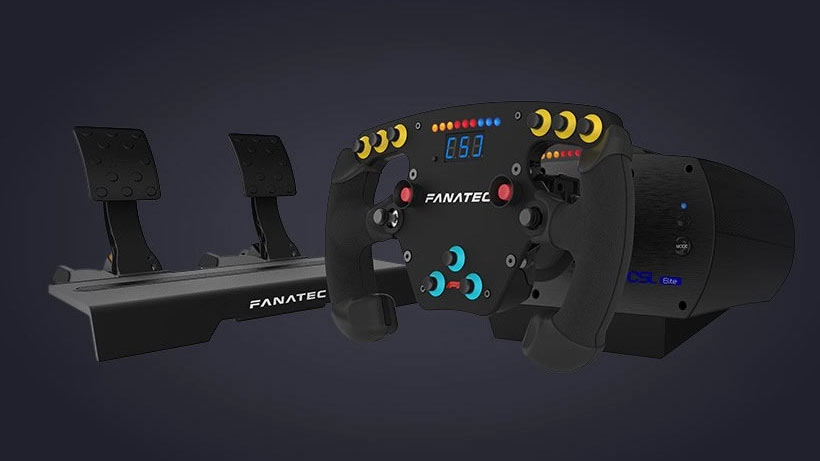 Just the usual note about how we reviewed this wheel base. For this review we have completely re-tested the CSL Elite as part of this F1 bundle. We tested almost exclusively on PS4, with a little play testing on our PC build. A selection of games were used in this review such as Assetto Corsa Competizione, iRacing, GT Sport and F1 2019. We would like to say no cars were harmed, but with our uniquely aggressive style of driving, we can’t promise that…

What is the Fanatec CSL Elite F1® Set

The Fanatec CSL Elite F1® Set takes the already great CSL Elite wheel base, and packages it with an F1 licensed wheel rim and a pedal set. This wheel bundle as a whole gives sim racers a great budget oriented complete wheel and pedal package.

If you are contemplating on upgrading from a budget wheel such as Logitech G29 or a Thrustmaster TMX, this is the perfect stepping stone. The extra investment to buy into the Fanatec ecosystem is well worth it. And this bundle helps negate some of the hassle of buying individual components by bundling everything you need in to one product. 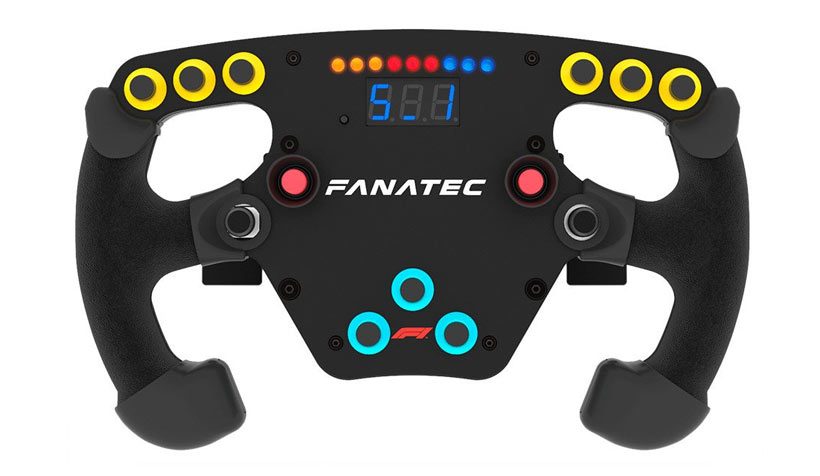 As usual unwrapping and revealing the CSL Elite F1 is as joyous as unboxing any Fanatec product. The packaging is supremely well put together. You will be in awe the first time you see the shiny wheel base and F1 steering wheel sitting snugly in the box.

Once you lift out the wheel base and wheel, which come attached together, you will find the rest of the hardware included. In total, you will receive;

Your first steps after emptying the box of cables, screws and accessories will be to plug in your new favourite toy.. If we can call it a toy. The CSL Elite is easy to set up, with a table clamp included, along with mounting holes if you fancy attaching it to your rig a little more securely.

Once you have got your head around your prefered mounting method, simply connect the pedals to your wheel base, and hook up the PSU. From there, all that is left to do is to plug the single USB connection cable in to your PS4 or PC. Having one single connection point from the wheel to your console is fantastic for those who like good cable management!

That’s it, your now ready to play. Although we would recommend updating the wheel’s firmware before playing, just to ensure you’re running the latest version. Once that is all updated, now you’re ready to play… For real this time!

The CSL Elite wheel base review

We’ll break this review down in to three main parts, before giving you our overall thoughts on its value as a bundle towards the end. We’ll first look at the CSL Elite wheel base, and make sure that is up to scratch. Then we’ll look at the F1 licensed wheel rim, before finally reviewing the pedals that are included. 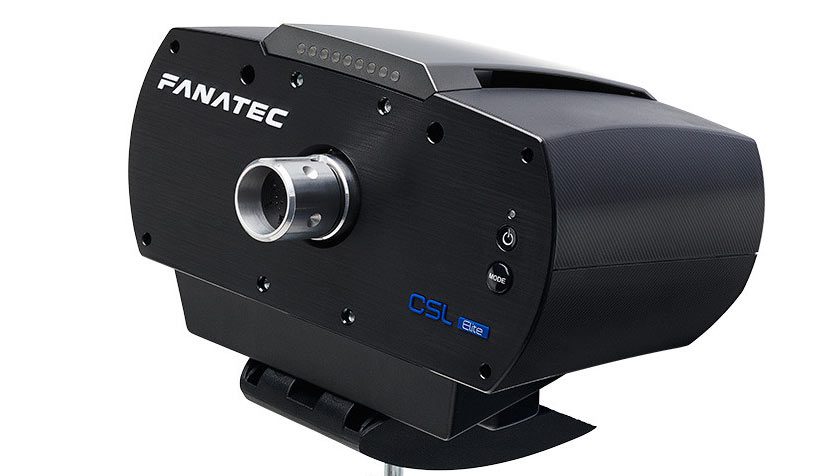 Starting with the aesthetics of the wheel base, the first thing you’ll notice is its size. In particular, how small it is. When compared side by side with other wheel bases it sits very flat, with a set of extremely bright LED rev lights on top. This is fantastic for when you’re using a steering wheel without rev lights. And they’re bright enough for someone in the next neighborhood to see. Damn, they’re bright.

On the front of the wheel base you will see a couple of buttons. One is the on and off switch, which allows you to save some of your energy by not getting up to turn it off once you’re done racing. So thumbs up Fanatec for thinking of practicality. 👍 The second button is the compatibility button. This switches the wheel base from PC mode to PS4 mode.

Also on the front of the wheel base, is a quick release shaft. This lets you change the wheel rim with ease. Beware, using this quick release can be very dangerous for your wallet! If you are like us, you will want to buy a different style of wheel rim for when you’re driving different cars. And trust us, Fanatec have a lot of great steering wheels for you to buy. All the money you’re saving by buying this bundle will soon disappear on different wheel rims. 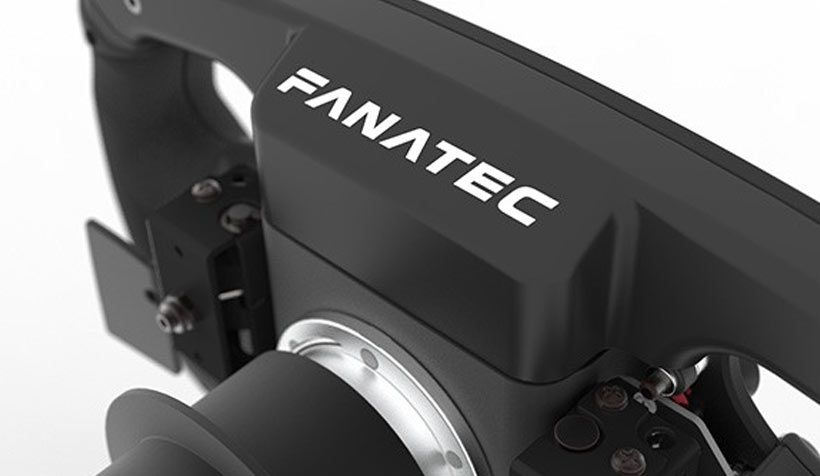 You’ll also start to notice more force feedback detail if you are coming from a gear driven wheel. That is because the belt drive system doesn’t mask or lose as much of the detail as a more mechanical gear driven wheel.

Gears typically mask some of the finer details due to the clunky-ness of multiple gears grinding together. Whereas a belt allows for a lot of that fine force feedback data to be transferred to the steering wheel as intended.

The CSL Elite is geared up (pun intended) to be Fanatec’s sort of entry level wheel. It is the lowest powered wheel base that Fanatec produce. Although, we wouldn’t use the term low powered and CSL Elite in the same sentence. The CSL Elite has stronger force feedback output than almost all of its direct competition.

Wheels from Logitech don’t compare to this, and only the most high end Thrustmaster wheel bases can get close to the power this CSL Elite puts out. In comparison, the best Thrustmaster wheels put out 6 – 6.4Nm of torque, while this entry level Fanatec wheel base puts also puts out 6Nm.

The really impressive part of the force feedback in this wheel base, is the range it has. By being relatively strong, it can create forces across a large range. 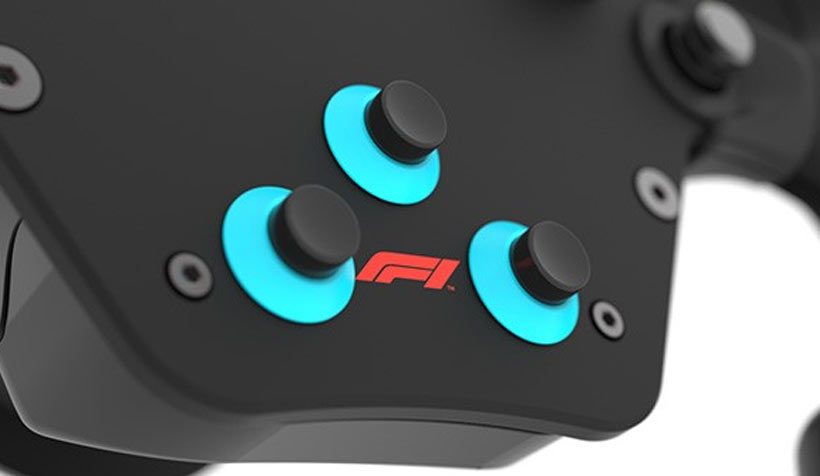 This range allows you to feel the fine difference between an almost flat painted kerb, and a change in track surface. That’s really impressive. No other wheel base that sits along side or below the CSL Elite’s price range can boast this level of force feedback detail.

As a whole this wheel base by Fanatec is fantastic.. You really do get what you pay for, and in this case. Paying a little extra to get this level of force feedback goes a long way.

This F1 branded and licensed wheel rim follows a similar form to other Fanatec formula style rims. It comes in at exactly the same width. It’s a similar weight, and it feels almost the same in your hand. This is a good thing, as Fanatec have mastered the ergonomics of a formula style rim. 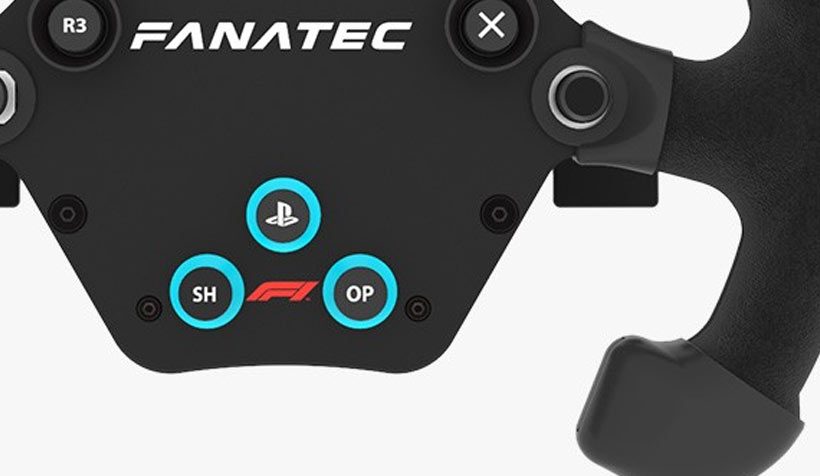 On first contact, the Alcantara grips feel great in your hand, and the wheel as a whole is very solid. You’ll find mostly metal as you poke around the wheel, and this gives it a premium feel. This helps ease your conscience a little when spending this much on a racing wheel.

Much like the older formula wheel rims from Fanatec, there are a wide selection of buttons on the face of this wheel rim. These allow you to control various aspects of your car whilst driving. And most of the buttons are accessible without removing your hands from the wheel. This is very good when your travelling through Eau Rouge at considerable speed.

These buttons do feature remove-able button caps. This allows PlayStation users to keep the usual set of square and circle buttons on the wheel so you know which button does what. Or for those who want to add real racing style buttons such as DRS for example. You can swap them in to give you a more realistic feel.

The shifters utilise a button pres which is disguised behind a paddle shifter with resistance built in. This feels nice when you charge through the gears, as you get a nice little click when you pull the paddle.

At the top of the wheel rim itself is a set of LED rev lights, which thankfully aren’t as blindingly bright as those on the wheel base. And just under this is a bright LED screen. This screen will show various things while driving, such as your current speed. 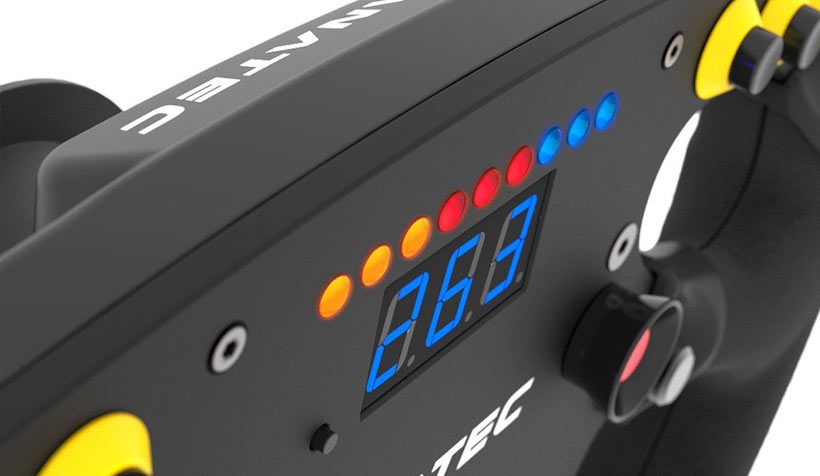 You can also save up to five different force feedback profiles, or setups. This allows you to switch between them on the fly without exiting out to a settings screen. This works really well if you like a different wheel feel for different cars or different game.

Overall, this wheel rim looks and feels great in your hand. It is light enough to allow the wheel base force feedback to sing and for the wheel to dance around in your hand. Yet, the materials used give the whole steering wheel a premium feeling.

The pedals that are included in this bundle are a basic set of two pedals. This is far and away this product bundles weakest aspect. To start with there are only two pedals, no clutch. You could argue this makes sense as an F1 branded product, as they don’t have a clutch. But it does limit its use outside of F1 and GT racing. 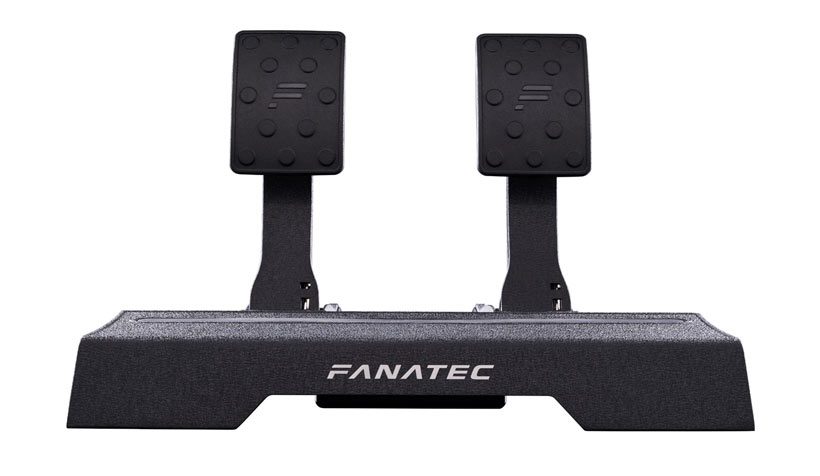 The throttle pedal as a whole works well. It is internally sprung so it bounces back as it should, and you can consistently control your throttle input. The brake pedal uses a similar technology, although feels much less natural than it should.

Unlike the much better load-cell brake pedal (which is an optional extra), the brake pedal included in this bundle measures how far you push the pedal, not how hard. This isn’t a realistic way of braking, and as a result is sometimes a little hit and miss.

Fanatec have tried to address this by installing a foam resister which makes the pedal harder to push the further you push it. This goes some way towards making it more realistic, but it’s certainly not as consistent as a load-cell pedal is.

Despite not having the load-cell already incorporated, it still feels every bit as good as other pedal sets within this price range. For example, the Thrustmaster wheel bundles often require an optional upgrade to better pedals. So does this kit. If you want to strive for realism you can upgrade, but the pedals included in this bundle do a reasonably good job. 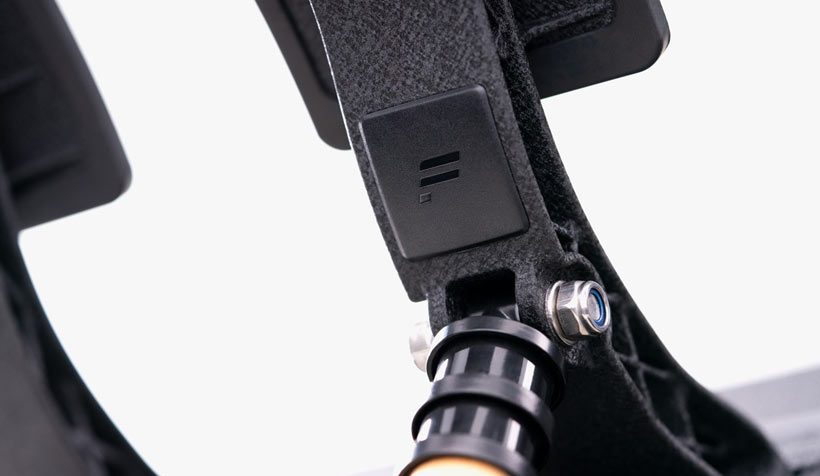 How does this CSL Elite bundle perform as a complete sim racing bundle?

As a complete set, this Fanatec CSL Elite bundle performs amazingly well. Is it worth buying? Absoloutely! Especially if you are currently using a Logitech g29, or a Thrustmaster T150 for example. This is light years ahead of those products in almost every way. The force feedback is extremely detailed and smooth across the whole range. The wheel rim feels like a premium product, and replicates the feel of a Formula 1 steering wheel remarkably well. And the pedals… well, they’re pedals. Let’s gloss over them.

But as a final sign off. The Fanatec CSL Elite F1 Set is one of the most cost effective ways to get in to the Fanatec ecosystem. And once you are in this ecosystem, trust us. You wont want to leave.

Is the Fanatec F1 Esports Wheel compatible with Xbox One?

Unfortunately the F1 Esports wheel rim by Fanatec is not compatible with Xbox One or Xbox Series X consoles.

Can I use the F1 Esports wheel on CSL Elite and ClubSport wheel bases?

As with most of Fanatec's steering wheels, you can use the F1 Esports rim across all of Fanatec's wheel bases. This includes compatibility with the CSL Elite and ClubSport wheel base.

As a complete bundle, including pedals, the CSL Elite F1 set is the cheapest way to buy a complete Fanatec racing wheel setup. 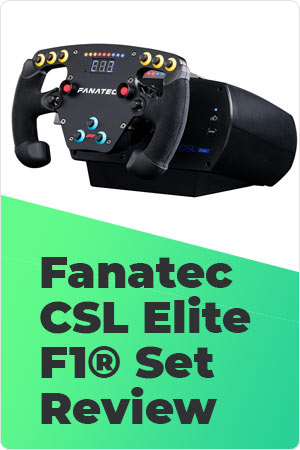 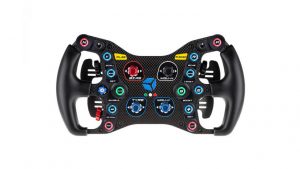